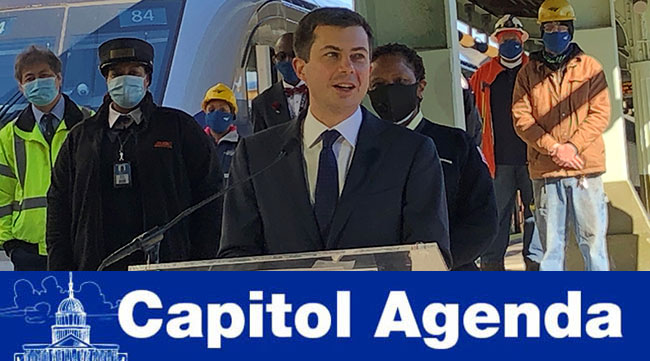 During his debut as the country’s top transportation officer on Feb. 5 at Washington’s Union Station, Secretary Pete Buttigieg insisted that massive investments are needed to repair infrastructure projects. Buttigieg, and President Joe Biden, say they intend to build highways, bridges, tunnels, ports and railways in a better way. And by that, they mostly mean for freight and commuter corridors to be able to withstand the impact of severe-weather events.

The secretary met with Amtrak employees at Union Station. As expected, he did not address trucking policy. But, in written responses to questions from senators on the Commerce Committee, Buttigieg offered viewpoints on several trucking issues.

Speed limiters: “I commit to advancing the integration of technology that improves the safety of all road users, potentially including technologies such as speed limiters for commercial motor vehicles. Under my direction, [National Highway Traffic Safety Administration] and [Federal Motor Carrier Safety Administration] would work closely with safety advocates and industry stakeholders to achieve the critical safety goal of reducing fatalities due to speeding.”